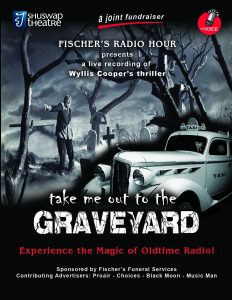 Scroll down for larger poster.

Take Me Out to the Graveyard

Shuswap Theatre and Voice of the Shuswap Community Radio invite you to experience the magic of old time radio! Join us on Saturday October 29th at 7.30 pm at Shuswap Theatre for a live recording of Wyllis Cooper’s Take Me Out to the Graveyard. This chilling 1947 radio drama will give you all the goosebumps you need to start your Hallowe’en weekend off right.

Sit in the quiet darkness of the theatre and listen as the actors use the microphones to bring the story to life. Watch as the sound effects are magically re-created right before your eyes.  Feel the hair rise on the back of your neck as the radio experience transports you to another world!

This joint fundraiser is open to everyone! Tickets are $12 at the door which opens at 6.30 pm. If you can’t make it to the live event, tune in to Voice of the Shuswap 93.7 at a later date and catch the broadcast of Take Me Out to the Graveyard. you may never feel the same about a taxi ride again!

In the spring of 2016, CKVS received a grant from the Community Radio Fund of Canada to record radio plays in the style of Old Time Radio.  The plays will be performed by different theatre groups within the Shuswap region – one play per group.  Shuswap Theatre is representing Salmon Arm, and will be performing Wyllis Cooper’s 1947 radio thriller, Take Me Out to the Graveyard.

Each play will be recorded in front of a live audience with actors stepping to the microphone to read their lines, then stepping back.  Foley* will be recorded at the same time on a separate microphone.  The plays will be mixed by an engineer, aired on CKVS-FM 93.7, and then archived for posterity and future broadcasts.

Shuswap Theatre has assembled an artistic team including Lois Archer-Duell (director), Lynda Hooper (technical director), and Astrid Varnes (producer) to create the show.  Actors have been recruited, scripts distributed, and rehearsals are underway. Actors are working on lines and picking out costumes. Radio technicians Jeanette Clement and Christine Deye have met with Shuswap Theatre’s sound technician Marcus Smith to discuss how to record the live event. Local advertisers are supporting the event through old-time radio commercials. Foley* artist Bram Hermsen is busy re-creating the sounds of car doors slamming, squealing tires, and spooky evenings, just as they would have done in the radio studio in 1947.

The recording/performance on Oct 29th will be a joint fundraising event between Shuswap Theatre and CKVS.

* Foley is the reproduction of everyday sound effects that are added to film, video, and other media in post-production to enhance audio quality. The Foley techniques are named for Jack Foley, a sound editor at Universal Studios. 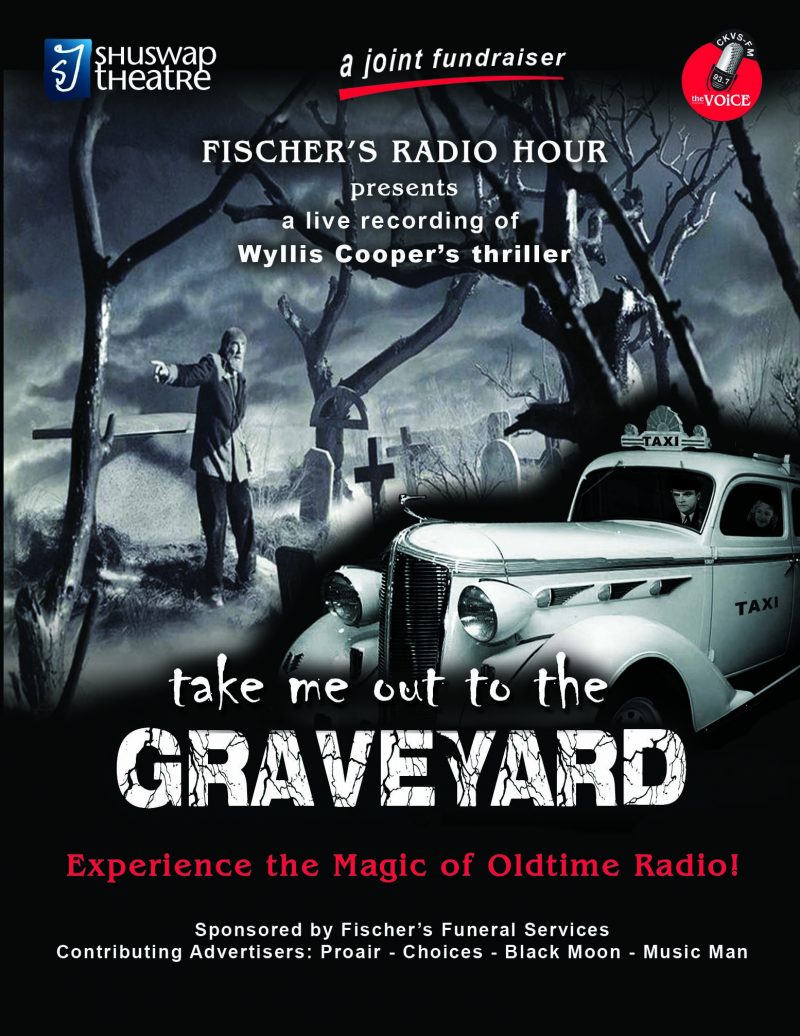