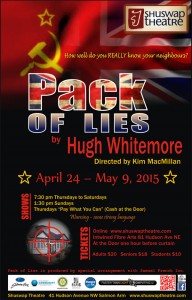 The cast and crew of Pack of Lies have returned from a very successful O-Zone Festival in Vernon. There were six very strong plays with coffee critiques and workshops over the course of the week. We brought back the following awards:

The names on the trophies are only part of the story. Many people contributed to the success in each area.

The cast and crew thought that the festival show was our best to date. It was extremely well received by the festival goers who had already seen a lot of fine productions.

Our performance on Friday evening was dedicated to the memory of Patrick Allwood. Besides his many appearances for Shuswap Theatre, Patrick performed in several productions for Powerhouse Theatre and the Chase Players.