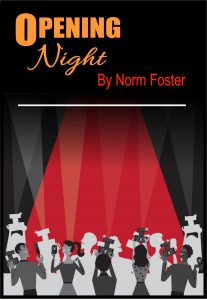 Director Paul Kirkwood-Hackett is looking for eight actors for our next mainstage production – a rollicking comedy by Canada’s favourite comedic playwright.

Auditions will be held at the theatre, 41 Hudson Ave NW, Salmon Arm

Five men and three women are to be cast. While the script suggests an age range of mid/late 40s for most of the roles, there is some flexibility so actors outside of that range are welcome to audition. The Tisdales in particular could be older.

Those auditioning will be asked to take part in theatre games, and to read selected scenes from the play in pairs and groups. It is not necessary to attend both auditions.

Please download, print and complete the Audition Sheet and bring it with you to the audition. If you would like to read the play in advance (always a good idea), or if you have other questions contact Paul or Bea Kirkwood-Hackett at 250-838-0230 or by email.