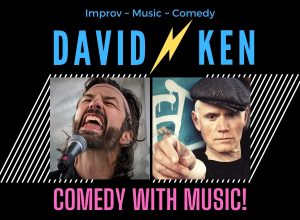 At long last the barriers of Covid, flooded highways and weather have relaxed and we can welcome David and Ken to perform in Salmon Arm.

Who are David Milchard and Ken Lawson? After years of performing improvisational comedy at festivals, Vancouver TheatreSports, The Second City, and the international sensation the Comic Strippers, these two comics have strapped on their guitars and combined two of their greatest loves: Music and Improv Comedy. If you feel like you’ve seen these two before, you certainly have because they’ve been cast in hundreds of movies and television shows over the years including productions by Netflix, ABC, amazon, NBC, CW, Disney, and the Youtube sensation Convos with my 2yrold.

Also available at Wild Craft Mercantile (in the old Blue Canoe Building) 121 Shuswap St NW and at the door.