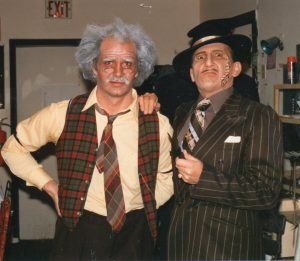 Recently my friend, Jack Alouf passed away, but he’s not gone, as many of us have splendid memories of him. I met Jack when he was the Director of the Recreation Department for the District of Salmon Arm. Jack thought Salmon Arm should have a theatre group. I was teaching drama, so he told me that if I would organize a group, he would look after the advertising. He did amazingly well. On a Tuesday night in 1977,  24 people showed up at the Drama Room at J.L. Jackson, and Shuswap Theatre was born, thanks to Jack. Once we got started, and had our own building in 1980, Jack began his twelve-production legacy with Shuswap Theatre. His first role was the Magician, in Aladdin and his Wonderful Lamp. With fantastic make-up and flowing robes, Jack was in his element. His sense of fun, comedy and ability … [read more…]