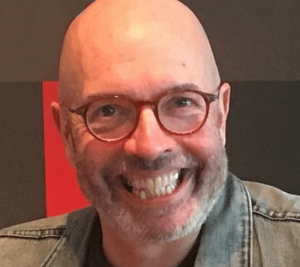 Jimmy is a native of Cornwall, Ontario. He is an actor, director and playwright in Vancouver, BC. He studied acting and theatre at Ryerson Theatre School in Toronto and École Jacques in Paris, France.

In Paris he directed, acted and/or wrote for La Galerie 55, A.C.T. and Carrefour de la Difference.

In London he directed The Watermelon for Fly on the Wall Theatre at the Park Theatre, The Latchmere and at the Edinburgh Festival.

Jimmy frequently directs large scale (150 actors) in Ann Jellicoe’s tradition of community plays. He has done this in Enderby, with the Splats’in Band, at Toronto Island and Vancouver.

He has been nominated for eighteen Jessie Richardson Awards for theatre in Vancouver and has received two.

He directs regularly at Studio 58, UBC, SFU and the Canadian College of Performing Arts.

This summer he will be performing in The Coyotes, his twentieth show at the Caravan Farm Theatre.

He is thrilled to be back adjudicating the 2019 Okanagan Zone Festival.