In Memory of John MacVicar 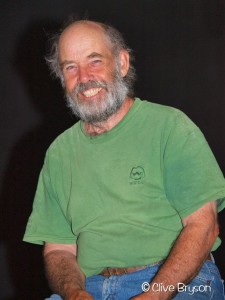 He nodded his head, smiled and said

“there’s the nub of the mystery, you can see at a glance in this great cosmic dance,

we’re both the object and subject of history”

-from the written musings of A. John MacVicar

John MacVicar, passed away suddenly on November 01, 2011 at his home in the Salmon Arm River Valley, and will be sadly missed by his many friends.

Born on December 11, 1946 in Saint John, New Brunswick, he joined the Air Force when young, hoping to become a pilot but his eyes were not good enough and he resigned after a year or so. He later joined the Army but only stayed for a short period. He travelled to Europe at a time when “everyone” was doing so. He started out in London where he worked for a while in Harrods’ food court. In Germany he drove a truck as a civilian for the Canadian Army stationed in Lahr.

After coming to British Columbia he worked as forestry Technician and later a carpenter. John was a great lover of nature and an avid reader. His work for the Salmon River Roundtable, the Salmon Arm Bay Nature Enhancement Society, the Caravan Theatre and particularly his set building over many years in the Shuswap Theatre endeared him to many colleagues. His sense of humour was legendary and his audible laughter was appreciated greatly by those on Stage at the many theatre performances he attended.