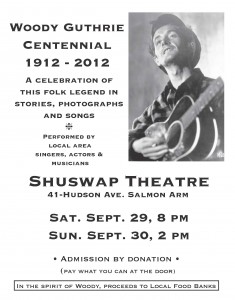 This summer marks the 100th anniversary of the birth of the legendary folk singer,Woody Guthrie. There was a celebration of his life and times at Shuswap Theatre on September 29th & 30th. The show consisted of stories about Woody, lots of photographs and local musicians performing twenty of the over two thousand songs he wrote. The pay-what-you can concert brought in about $2,000 which will be used to support the people that Woody sang and played for, “the down-on-their-luck folks” who get help through local food banks. There will be a CD and a DVD made of the concert and sometime in the future you will be able to hear it on “The Voice of the Shuswap” radio. If you’re interested in a CC or DVD ($10 each) contact Jake Jacobson at 250 832-2300.