Our gratitude to everyone who helped make possible our very successful fundraiser, the Broadway Musical Revue this past weekend. Jake Jacobson took the lead in planning this collaborative enterprise which featured two dozen songs from Broadway hits spanning seven decades.

Admission was by donation and reached a total over the three shows of $3790.75 along with $160.75 from the concession. The funds will be used to repaint the exterior of the building but there are lots of other projects needing doing that will happily consume any surplus.

The singalong feature of the show was a big hit with words projected on a screen and audiences joining in enthusiastically. The show kept a brisk pace, moving from song to song without interruption. The performers knew that if they were having fun, the audience would, too. And they did. We have received many comments about how this should be an annual affair. Plans are afoot.

There will be sing-alongs, sad songs, happy songs, silly songs, and powerful songs. Join us for a vibrant evening of music and help us put a fresh coat of paint on the building (and perhaps some other improvements)

Check out the Program for the music as well as the names of everyone involved. 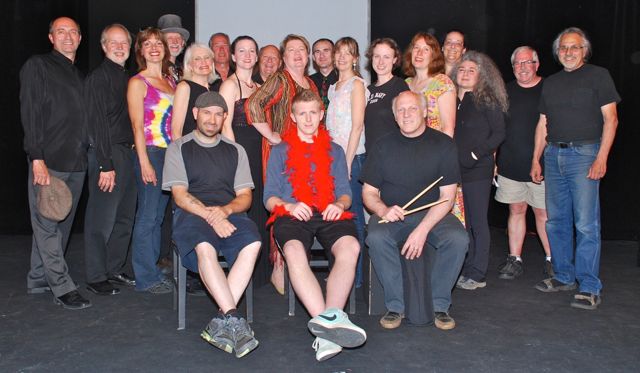 The Cast, Band in Front