Mainstage shows run for three weekends – no performances on Monday, Tuesday or Wednesday nights. Thursday nights are ‘Pay What You Can,’ cash only at the door. Sunday shows are at 1:30 pm, all others are at 7:30 pm.

Note: we have not included a children’s price this season as all our mainstage plays are adult themed.

(A convenience fee applies when purchasing tickets on line. This fee is charged by our Vendini service provider and does not go to Shuswap Theatre.) 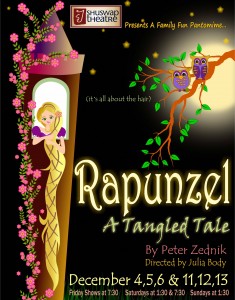 The whole family will be chuckling over this trendy take-off on the traditional tale. It’s all about the hair as we meet Prince Pompadour, King Bouffant and Queen Beehive, amongst other zany characters. The one liners fly thick and fast and the audience can’t help but get involved. A must see for this holiday season. Who knows, maybe even a visit from the big guy.

Presented by arrangement with the playwright.